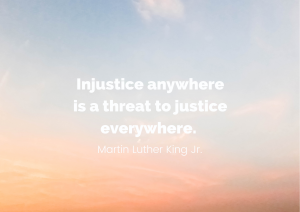 King was the chief spokesperson for nonviolent activism in the Civil Rights Movement, which successfully protested racial discrimination in federal and state law.

The campaign for a federal holiday in King’s honor began soon after his assassination in 1968. President Ronald Reagan signed the holiday into law in 1983, and it was first observed three years later.

At first, some states resisted observing the holiday, giving it alternative names or combining it with other holidays. It was officially observed in all 50 states for the first time only in 2000. This only proves that it is a long way until we have equal treatment between all people in this country.

After a year marked by numerous manifestations for equality, the defense of black people’s rights, and the conviction of racist acts, the #BlackLivesMatter movement, it is essential to cherish the memory of one of the most prominent defendants of the desegregation: King was an American Christian minister and activist. He participated in and led marches for blacks’ right to vote, labor rights, desegregation, and other fundamental civil rights.

On October 14th, 1964, he won the Nobel Peace Prize for combating racial inequality through nonviolent resistance.

King was fatally shot on April 4th, 1968, as he stood on his motel’s balcony in Memphis, Tennessee, where he was in support of the black sanitary public works employees.

My wish is that no one else ever has to die in defense of their rights and equals. Let’s never leave the Black Lives Matter peaceful movement to die until all people have the same treatment, in this country or any other. #WeAreAllHumans.